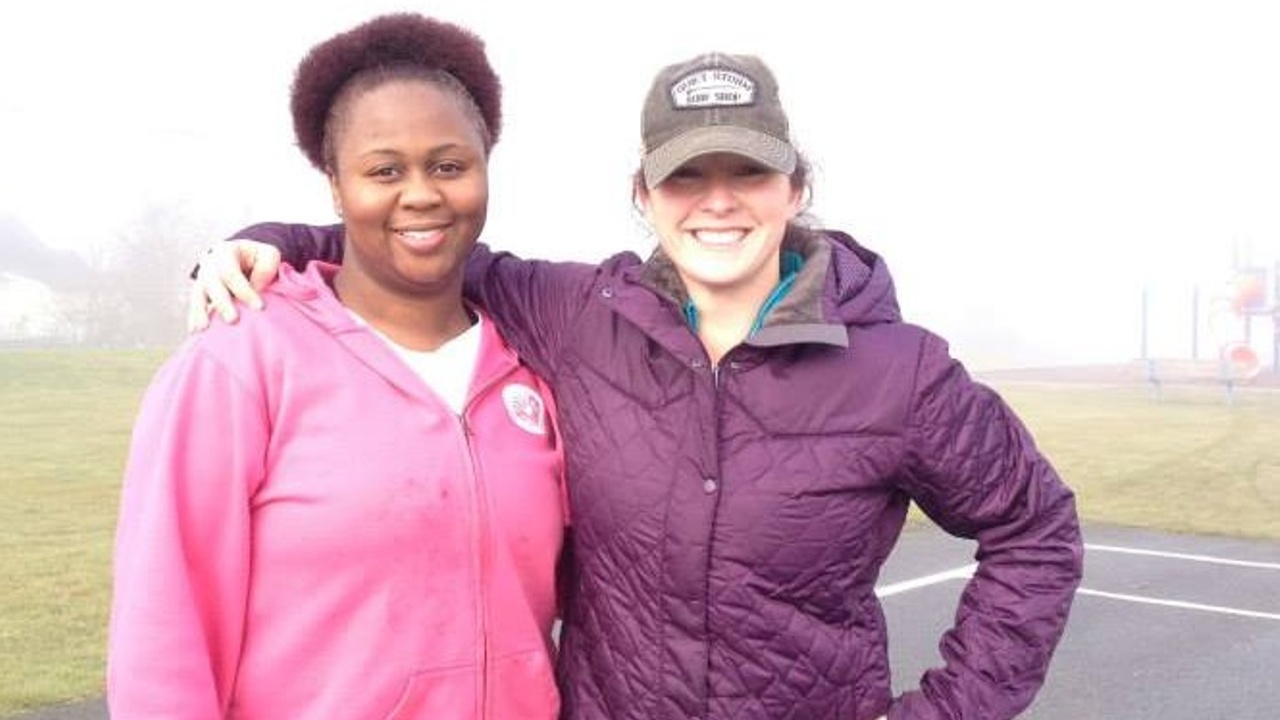 In December 2013, it was freezing cold in most of the country.   Something called a "polar vortex" had come, making it one of the coldest winters in a long time.   I had just moved to Lake Stevens, Washington with the little boys, and a week before Christmas Josh returned from a 1-year deployment.   I was 3,000+ miles from friends and family and knew exactly zero people in Washington State.

I announced to Josh during his first few days at home that I would be starting an outdoor bootcamp class called "PIP," short for Pain in the Park.  For background, the original PIP was created by Donta Finney in Salisbury, MD.  PIP had been a cornerstone for me in losing weight and getting in shape the previous year.  It was a simple class, held in a public park, with basic equipment.   Just a good old fashioned butt kicking with great people.  It was fun and empowering and Donta inspired me to get my personal training certification so I could help others the way he had helped me.  I trained my first "real" client before leaving Maryland, but was green as green could be as far as coaching goes.

Here was the plan:   I would meet people on Facebook and around town and then convince them to come to the freezing cold park to exercise.   At this point, my equipment consisted of exactly 6 dumbbells, 1 jump rope, 1 bosu ball, 1 yoga mat, a set of battle ropes and an old tire I got for free from someone's trash!

On Christmas morning snow covered the ground.  As we sat by the tree to open presents, I unwrapped a gift from Josh.   In the box was a purple waterproof Under Armor jacket.  Josh said he bought it for me because and he said I would need it for my class.  After all, the Pacific Northwest wasn't exactly known for nice winter weather.  I wasn't sure if purple was my color.   But it was a beautiful, warm jacket and deep down I hoped that Josh didn't waste his money buying it for me.  I had no idea if I could actually do this.

So two weeks later, I created a PIP event on Facebook and tried to make friends...specifically facebook friends and neighborhood friends.  For military spouses, this whole "friend making thing" is baked in the cake but I'm not sure if it is ever easy.   I had a few people say they were interested in PIP and I hoped they would come.   I was very nervous.  What if nobody came?  What if people did come and I did a bad job coaching them?  What if I didn't know how to do something?   What if people hated it?  What if people would think I didn't know anything because I had never done this before?

On the morning of my first class, I put on my new purple jacket, loaded my Yukon with my gear and drove to Lake Stevens Community Park.   The snow was gone, but ice covered everything.   Out in the Pacific Northwest, the mornings are almost smokey and in the middle of the park, it was shiny, gray, and beautiful.  Can you say vampires?? ??‍  So I set up my gear and waited.

This is the actual picture from that morning. I was hopeful the few RSVP's would brave the freezing wet cold and show up.   I waited about 45 min by myself breathing in the cold damp air before I gave up.  Nobody came.

I went home disappointed and cold.   Maybe starting an outdoor boot camp class, with no friends and no equipment, in the middle of winter in Washington state wasn't the genius idea I thought?

I thought again about why I wanted to do it.   PIP had been a pivot point in my fitness journey, and I needed to do this for others.  Instead of folding, I doubled down.  I created 2 Facebook events instead of 1 for the following week, in 2 separate locations.   I reached out to more people online, chatted with more people in my neighborhood.   I was hopeful.

The next Saturday morning I went back to Lake Stevens Community Park and waited... and waited...nobody came.   I packed up my gear up and headed to Everett.  This class was scheduled for an hour later.   Just like Lake Stevens, it was foggy and gray.  I actually was afraid if people came they wouldn't be able to find me through the thick cloud.   I waited.   After 15 min, I saw someone.  My first PIP'er.   A lot went through my head during that first session.  Would she think I was a weirdo since she was the only one to come to my class?   Would she wonder if I knew what I was doing?  Would she like the class?

In the weeks and months that followed, I just kept scheduling classes, inviting strangers, and coaching anyone that came.  There were plenty more times those first few months that nobody would come, but slowly we started building a group of PIP'ers.  I learned how to coach by doing.  I slowly acquired more equipment and spent hours learning new exercises.   I would go out rain or shine, most of the time with toddler Henry in toe.  I would work my butt off for anyone that would come.   I posted pictures after each class so people could see how amazing they were.   The class began to grow and after a few months, it developed into everything I hoped it would be.   By the summer I was coaching 2-3 classes/ week with a regular group of folks attending.

I learned a tremendous amount from those early PIP days and will be forever blessed by the friendships in my PIP family. Coaching PIP led me to coaching CrossFit and was the beginning of countless other incredibly special coaching relationships and friendships at CrossFit Lake Stevens, CrossFit PAX and now as a nutrition coach.  I discovered my calling as a coach.

But here's the thing...when I think back to that snowy Christmas morning and that purple jacket gift, I remember that I was so uncertain.  I didn't have the experience, relationships, equipment, or even the weather to give me hope of success.  I just had my desire to help people.  I would like to reflect on a few lessons from those days.

#1:  I took action before I knew what would happen.   Sometimes guarantees of success aren't going to be there but you just have to get moving anyway.   The timing, weather, circumstances might never be right.  Just get started.

#2 Never judge the outcome by the first day or your first try.  If I had given up after that first solo day out in the park, I would have missed out on so much.   That first day told me nothing about the amazing things ahead.

#3:  Surround yourself by people that believe in you.  Josh didn’t tell me all the reasons I wouldn’t succeed.  Instead, he bought me a purple jacket that would keep me warm and dry while I worked on making my dream a reality.